What is a High-Temperature Heat Pump?

No clue what a heat pump is and how it can supply high-temperature process heat? Get an overview here!

A heat pump is a device that moves heat from a certain temperature to a higher temperature by adding electrical power. Thereby, heat is recovered from an unusable temperature to a temperature where it it is useful, e.g. for process heating or any other application. Often, industrial heat pumps are recovering excess heat from the same process as they are supplying to. In this case, both the heating demand and the cooling demand of a process can be covered, and performances get very high. 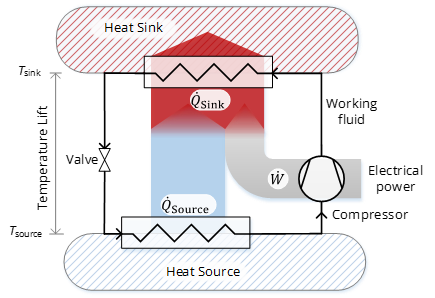 The heat from the heat source and the supplied power add up to the amount of heat which is supplied to the heat sink. The power which is used for upgrading the heat is only a fraction of the supplied heat, enabling two to five units of heat to be supplied per unit of consumed power. In some applications, the performances get even higher. This ratio is referred to as the Coefficient of Performance (COP), which is usually used for characterizing the performance of a heat pump. The maximum achievable COP is dependent on the temperatures of the heat source and the heat sink, while the highest COPs may be reached for low temperature lifts. However, the higher the temperature lift, the higher the amount of power which has to be invested for upgrading - and accordingly the lower is the COP. Keeping this in mind, it becomes apparent why it is important to keep temperature differences low and match the temperature profiles of the secondary fluids.

Natural refrigerants have several advantages, which make them the optimal foundation for the development of high-temperature heat pump technologies.

High-temperature heat pumps can be integrated in a variety of applications - both in existing plants and new process equipment. A proper integration is key to reaching the highest performances.

Heat pumps are a key technology for the transition towards sustainable energy systems. They are able to provide electricity-based process heat at the highest efficiencies and the lowest cost of heat.